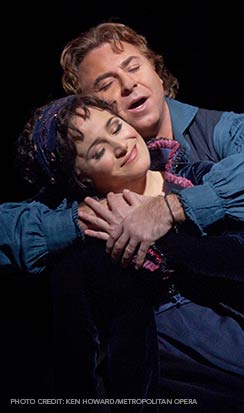 Go behind the scenes with Met opera stars including interviews with cast, crew, and production teams who give an unprecedented look at what goes into the staging of an opera. Experience the eighth season of the Metropolitan Operaâ??s Peabody and Emmy Award-winning series The Met: Live in HD in cinemas nationwide. The broadcast of Pucciniâ??s Tosca will be presented live on Saturday, November 9, 2013 at 12:55 PM ET / 9:55 AM PT, followed by an encore presentation in select cinemas on Wednesday, November 13 at 6:30 PM in all time zones. Pucciniâ??s timeless verismo score is well served by an exceptional cast, led by Patricia Racette in the title role of the jealous diva, opposite Roberto Alagna as her lover, Cavaradossi. George Gagnidze is the villainous Scarpia. Tosca is a co-production of the Metropolitan Opera, the Bayerische Staatsoper and the Teatro alla Scala.