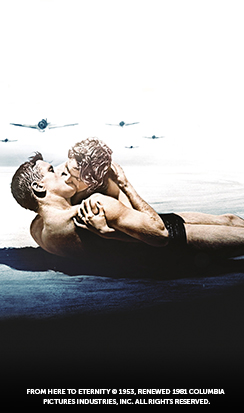 It's 1941. Robert E. Lee Prewitt has requested Army transfer and has ended up at Schofield in Hawaii. His new captain, Dana Holmes, has heard of his boxing prowess and is keen to get him to represent the company. However, 'Prew' is adamant that he doesn't box anymore, so Captain Holmes gets his subordinates to make his life a living hell. Meanwhile Sergeant Warden starts seeing the captain's wife, who has a history of seeking external relief from a troubled marriage. Prew's friend Maggio has a few altercations with the sadistic stockade Sergeant 'Fatso' Judson, and Prew begins falling in love with social club employee Lorene. Unbeknownst to anyone, the Japanese bombing of Pearl Harbor looms in the distance.

Winner of eight Academy Awards®, including Best Picture in 1953, this patriotic narrative about war and love is a film to be remembered for all of eternity.