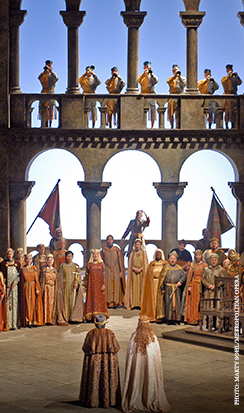 Celebrate the tenth anniversary of the Metropolitan Operaâ??s Peabody and Emmy Award-winning series The Met: Live in HD. The broadcast of Wagnerâ??s TannhÃ¤user will be presented live on Saturday, October 31 at 12:00 p.m. ET / 9:00 a.m. PT, followed by an encore presentation in cinemas on Wednesday, November 4 at 6:30 p.m. in all time zones. James Levine conducts Wagnerâ??s early masterpiece in its first return to the Met stage in more than a decade. Todayâ??s leading Wagnerian tenor Johan Botha takes on the daunting title role, opposite soprano Eva-Maria Westbroek as Elisabeth, adding another Wagner heroine to her Met repertoire after her acclaimed Sieglinde in the Ring a few seasons ago. On the heels of his recent triumph in Parsifal, baritone Peter Mattei sings Wolfram, and mezzo-soprano Michelle DeYoung is the love goddess, Venus.