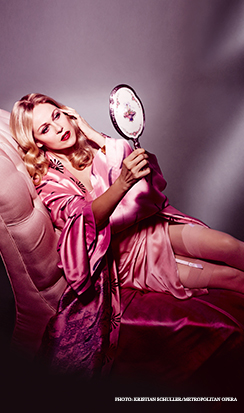 Celebrate the tenth anniversary of the Metropolitan Operaâ??s Peabody and Emmy Award-winning series The Met: Live in HD. The broadcast of Pucciniâ??s Manon Lescaut will be presented live on Saturday, March 5 at 12:55 p.m. ET / 9:55 a.m. PT, followed by an encore presentation in select cinemas on Wednesday, March 9 at 6:30 p.m. in all time zones. The Met stage ignites when soprano Kristine Opolais and tenor Roberto Alagna join forces in Pucciniâ??s obsessive love story. Opolais sings the title role of the country girl who transforms herself into a Parisian temptress, while Alagna is the dashing student who desperately woos her. Director Richard Eyre places the action in occupied France in a film noir setting. â??Desperate passionâ? is the phrase Puccini himself used to describe the opera that confirmed his position as the preeminent Italian opera composer of his day. Met Principal Conductor Fabio Luisi leads the stirring score.