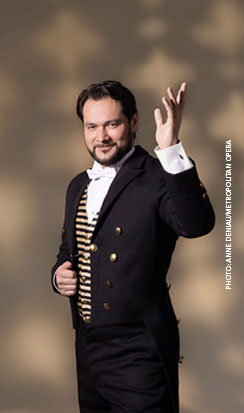 Experience the ninth season of the Metropolitan Operaâ??s Peabody and Emmy Award-winning series The Met: Live in HD in select cinemas nationwide. The broadcast of Mozartâ??s Le Nozze di Figaro will be presented live on Saturday, October 18 at 12:55 p.m. ET / 9:55 a.m. PT, followed by an Encore presentation in select cinemas on Wednesday, October 22 at 6:30 p.m. in all time zones. Music Director James Levine conducts a spirited new production of Mozartâ??s masterpiece, directed by Richard Eyre, who sets the action of this classic domestic comedy during the gilded age of the late 1920s. Dashing bass-baritone Ildar Abdrazakov leads the cast in the title role of the clever servant, opposite Marlis Petersen as his bride, Susanna, with Peter Mattei as the philandering Count they work for, Amanda Majeski as the long-suffering Countess, and Isabel Leonard as the libidinous pageboy, Cherubino.