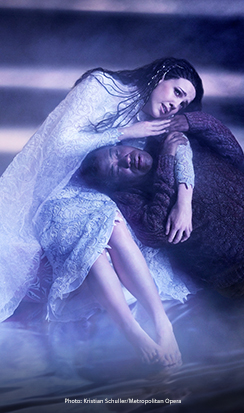 Special Fathom Features: Go behind the scenes with the Met's stars! During intermission, interviews with cast, crew and production teams give a revealing look at what goes into the staging of an opera.

An encore performance of Saariaho's L'Amour de Loin will be shown in select cinemas on Wednesday, December 21 at 6:30 p.m. local time. Please note: not all cinemas showing the live transmission will present an encore showing.

One of the most highly praised operas of recent years, which had its premiere at the Salzburg Festival in 2000, Kaija Saariaho's yearning medieval romance L'Amour de Loin (Love From Afar), has its Met premiere this season. The production is by Robert Lepage, co-produced with La Opera de Quebec, where it premiered to acclaim last summer, in collaboration with Ex Machina. Debuting Finnish conductor Susanna Malkki leads the performance, which stars Susanna Phillips as ClÃ©mence, Eric Owens as Jaufra, and Tamara Mumford as the Pilgrim who carries messages of love between them.

Casting and cinema locations are subject to change.