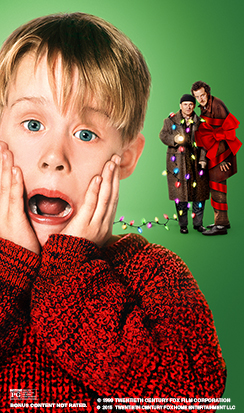 The greatest holiday family film ever

Fathom Events and Twentieth Century Fox are celebrating the 25th Anniversary of Home Alone by bringing the beloved holiday family film back to select cinemas on Sunday, November 8 and Wednesday, November 11, with a final showing on Wednesday, December 9. When Home Alone debuted in theaters 25 years ago, audiences flocked to the film making it #1 at the box office for an unprecedented four-month run. Eight-year-old Kevin McCallister (Culkin) has become the man of the house overnight! Accidentally left behind when his family rushes off on a Christmas vacation, Kevin gets busy decorating the house for the holidays, but he's not decking the halls with tinsel and holly. Two bumbling burglars are trying to break in and Kevin's rigging a bewildering battery of booby traps to welcome them! Directed by Chris Columbus (Mrs. Doubtfire) and written by John Hughes (The Breakfast Club, Sixteen Candles), this beloved classic is a must-see holiday film for the whole family.