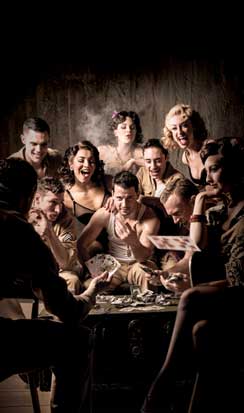 An epic musical of love and desire

Fathom Events and Omniverse Vision are partnering to bring Tim Riceâ??s new musical of love and desire, From Here to Eternity, to cinemas nationwide on October 2, October 5 and October 9. Adapted from James Jonesâ?? classic 1951 novel, Tim Riceâ??s breathtaking new musical is a gripping tale of illicit love and army life set in 1941 Hawaii, immediately prior to the attacks on Pearl Harbor. Filmed specifically for movie theaters across two nights at Londonâ??s Shaftesbury Theatre, this epic three-day-only event will provide cinema audiences across the county with an exclusive first look at Tim Riceâ??s acclaimed production before its 2015 Broadway debut. PLUS audiences will be treated to behind-the-scenes footage from the Shaftesbury and an interview with Tim Rice. Described as gritty, raw and gutsy, packed with chemistry and full of heart, this is an event you wonâ??t want to miss!