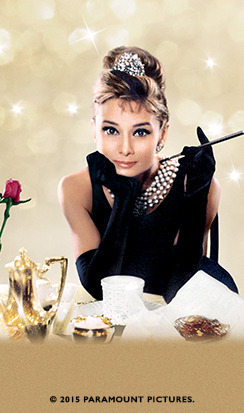 Delight in exquisitely produced commentary from Turner Classic Movies host Tiffany Vasquez that will reveal what makes Holly Golightly one of filmâ??s most charming heroines.
Fathom Events, Turner Classic Movies, and Paramount Pictures invite you to fall in love again with Breakfast at Tiffanyâ??s (1961) when it charms its way back into select cinemas nationwide for a special two-day event on Sunday, November 27 and Wednesday, November 30.

Winner of two ACADEMY AWARDSÂ®*, Breakfast at Tiffanyâ??s captured the imagination of audiences everywhere and made an indelible impact on movies, fashion and society at large when it debuted in 1961. In director Blake Edwardsâ?? timeless classic, Audrey Hepburnâ??s intoxicating New York party girl embarks on a wildly entertaining, comedic adventure to find love in the big city.

This film will be shown in the same aspect ratio as when it was originally released in cinemas.
Â© 2015 Paramount Pictures.
â??Academy AwardsÂ®â? is the registered trademark and service mark of the Academy of Motion Picture Arts and Sciences.